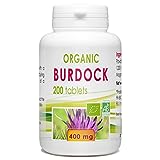 Burdock root is a underground tuber of greater burdock plant that found its use as a vegetable and medicinal herb. The plant burdock is a short biennial which believed to be native to Northern Europe and Siberia. In Japan, popular as gobo, it has been cultivated at larger scale as a major root herb since earlier times. In the nature, however, burdock sighted as a wild, easy-growing, hardy plant existing in almost any parts of the planet. Botanically, burdock belongs to the family of Asteraceae; in the genus of Arctium, and known scientifically as Arctium lappa.