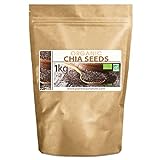 Salvia hispanica, commonly known as chia, is a species of flowering plant in the mint family, Lamiaceae, native to central and southern Mexico and Guatemala. The sixteenth-century Codex Mendoza provides evidence that it was cultivated by the Aztec in pre-Columbian times and economic historians say it may have been as important as maize as a food crop. It was given as an annual tribute by the people to the rulers in 21 of the 38 Aztec provincial states. Ground or whole chia seeds are still used in Paraguay, Bolivia, Argentina, Mexico, and Guatemala for nutritious drinks and food